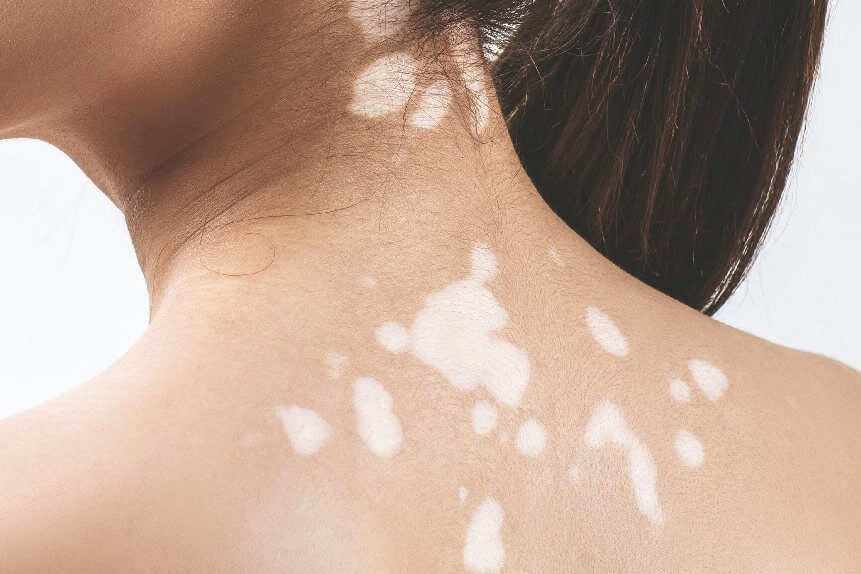 The individual affected with vitiligo are at higher risk of developing:

Vitiligo is the most common dermatological disorder, in which hypo-pigmented, white patches or macules appear on the skin (skin loses its natural color). This condition affects 2% of the total population of the world.

The white patches (spots) occur due to the following reasons:

2) The other reasons are genetics, sunburn, stress, and exposure to certain harmful industrial chemicals.

This undesirable skin condition mainly results in a significant negative psychological effect and makes the affected individual embarrassed and ashamed of their appearance. It has been observed that a large number of patients of vitiligo are also dealing with depression.

Vitiligo is not contagious and does not spread by direct contact, but it is a lifelong health condition.

1) Non-segmental vitiligo
In this type of vitiligo the patches are spread all over the body and are present in the body in a symmetrical pattern. It is the most common type of vitiligo and can be further categorised into the following types basis the area where depigmentation occurs:

1.1 Generalized: Appears in the form of symmetrical patches on both sides of the body.

1.2 Universal: This is a very rare form of vitiligo which covers up to 80% of the body.

1.4 Acrofacial: Affects the fingers or toes.

1.5 Mucosal: Affects the area around mucous membranes and lips.

2) Segmental vitiligo
In this type the patches are present on one side of the body, and it is the least common type. It occurs at an early age and expands for a few years.

The candidates affected by vitiligo must take the following precautions:

There is no complete cure for such skin disorder, but some specific treatments can help to improve this skin condition. A dermatologist or a vitiligo specialist will advise a suitable treatment as different types of vitiligo require different treatments. The diagnosis is made with the use of a special lamp to shine ultraviolet light onto the skin to determine vitiligo.

Combinations of treatments can also help the skin to return to its color that has been lightened because of vitiligo.

The treatment measures include:

1) Medications and creams
Certain topical and corticosteroid creams can help the affected skin color to return. The topical treatment is effective, easy to use, and improves the appearance of discoloration. This treatment method is preferred for a small discolored area.

2) Narrowband-UVB light
It is also known as phototherapy, and it is an efficient method in vitiligo treatment. It is a gold standard treatment for generalised vitiligo in both adults and children. This can be safely used for pregnant ladies or lactating mothers. The treatment takes 12 months to show results and sessions are performed twice or thrice a week.

3) Excimer Laser
This is quite effective in treating facial vitiligo. Within the first 4 weeks a dermatologist can suggest whether it’s working for the patient or not. Generally, up to 65% of improvement can be seen within 12-14 months of the treatment.